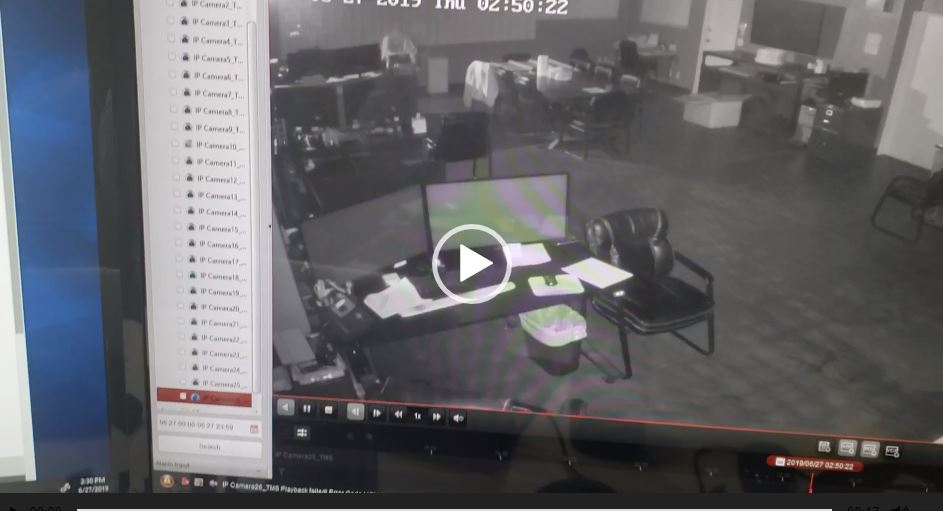 Let me begin by saying I am not a firm believer in “Orbs”.  Some ghost hunters swear by them, but I feel that 99% of the time orbs are caused by eiither dust particles floating about and reflecting off the light, or flying insects, reflections on glass, etc.

This is one time in my life I took a second look.  Again, when doing paranormal investigation, one single item, such as an orb, does not an experience make.  But the more bits of evidence that are compounded in an event do lead to point in that direction.

Here is one such event.  For starters, I arrived at work to notice one of our security cameras  non functioning.  I called over to our I.T. guy and told him to get it up and running. – And to see if he could determine why it went dead.

He came back to my office a couple of hours later and was visibly shaken.  He asked me if I believed in the supernatural.  I asked him what this was all about.

There were two incidents.  First, before the camera went dead, he captured an orb rising up from as chair within view.  a few minutes later he captured another orb coming from the door, going across the floor directly to  the computer desk  right under where the camera was mounted.  Then the orb went up and within a few seconds the camera went completely dead.  It remained off until it was completely resete by him the next day.

The interesting thing about the orbs that caught my attention is that they seemed to have intelligent motion.  It wasn’t just random floating that you would expect from dust, or even an insect.  The fact that right as the orb approached, the camera went dead for no rational reason, seems to add validity that something otherworldly was occuring.

Last, we viewed the footage from the security camera across the room facing the computer desk and camera that wend dead.  At the exact moment the orbs were occurring, you see the computer screens come to life, (the image being reflected in the glossy white board behind the monitor), this only occurring when the mouse is moved or a key pressed on the keyboard.  Below are the videos, which we recorded with a cell phone, because oddly, we could not download the videos no matter how hard we tried – a first, by the way.

Judge this issue for yourself.  I’d love to hear your comments below.

Video shows an Orb coming from the doorway, approaching the desk, then camera, then the camera goes dead a few seconds later.

Video is from opposite direction.  Notice the computer come to life when the orb approached from the door.  This can only happen with mouse movement, or when a key is pressed.